God is also inside Planned Parenthood 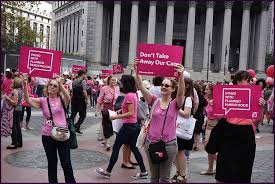 Excerpted from “God Is Also Inside Planned Parenthood”

They were last night as I walked in to a Planned Parenthood discussion on “A Celebration of Faith and Reproductive Health.”

They’re always there, the voices to protect the unborn.

A few protesters waved graphic images of bloody broken babies and held “Planned Parenthood = Murder” signs. A man on a megaphone shouted Scripture from the curb.

For a moment I wondered about all the good these protesters could do if they combined their passion and turned it into everyone’s cause. Because everyone wants to reduce unwanted pregnancies and abortions.

As I walked into the meeting room I was struck by the number of men who showed up, men who don’t own a womb but must understand why they must never own mine.

I grabbed a chair in the front row and listened to a panel of faith leaders and one secular humanist share why they support reproductive rights in the context of their beliefs.

Rev Davis, former Chair of Planned Parenthood’s Clergy Advisory Board, spoke frankly about his years as chaplain at Skidmore College during the late 60’s.

When he first started he told his wife, “How hard could it be to counsel 1400 girls?”