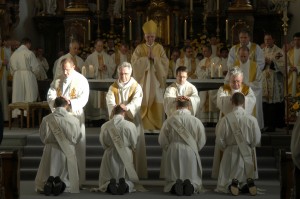 Great article (linked below) on why the traditional branches of the Catholic and Mormon church can’t sustain themselves unless they reform to include women.

“The contradictions are non-sustainable.”

Some of my friends, from their polite silence, likely find my feminist, new-age, optimistic, this-too-shall-be-overcome attitude regarding social change non-sustainable.

I’ll cop to being the annoying hippie optimist but I’m not as much Pollyanna in a peace shirt about equality and social change as I am just pragmatic.  Look back to see the future for women’s equality. The vote. The ERA. Reproductive rights. Glass ceilings. Co-ed college. Pay equity gaps closing. Facebook CEO Sheryl Sandberg. Women stand everywhere a man stands, except as priests.

Our nation spins on an axis of the train-can’t-stop-now social progress. So, if conservative branches of the Catholic and Mormon church fight women in the priesthood they’ll be left behind in a pool of bitterness barking to a growing minority about the dangers of the heretics.

The conservative grip on the male hierarchy in the church has become a paranoid rant to old ghosts because, writes Damon Linker in an article for The Week:

The churches are now largely populated by people who have no living memory of it ever having been otherwise. Living, studying, working, and voting in a world marked by ever-increasing recognition of the equal dignity of men and women, they go to church on Sunday and confront our culture’s last significant institutional vestige of inequality — when that very institution worships the God who is the ultimate source of our egalitarianism.……But in both Catholicism and Mormonism, there’s often nowhere else to go. It’s either love it or leave it.  Read more….