High levels of homocysteine and depression – certain supplements may help 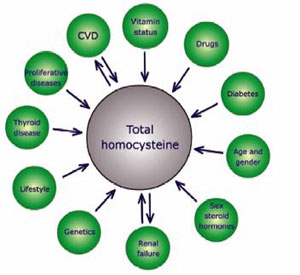 Researchers believe that depression, particularly in the elderly, may be related to elevated homocysteine levels. A deficiency in B vitamins may be the cause.

While elevated homocysteine levels are linked to heart disease and stroke, it may also contribute to depression, particularly in older people.

Homocysteine is a harmful amino acid that naturally occurs in all humans. It is involved in cellular metabolism and the manufacture of proteins.

Homocysteine irritates the lining of the blood vessels causing them to become scarred, hardened, and narrowed. This inflammation makes the heart work harder which can lead to heart disease. High levels of homocysteine also cause increased blood clotting. Blood clots decrease or block the flow of blood through blood vessels, resulting in strokes and heart attacks.

Homocysteine levels naturally vary according to age, gender, diet, hereditary factors, and general health. Approximately 5-10% of the population have levels that are too high.

Our bodies naturally use vitamin B12 and folic acid to convert homocysteine into a compound called SAMe – a source of methyl-groups. Without sufficient B-vitamins, blood homocysteine levels rise. Elevated homocysteine levels are linked to an increased risk of cardiovascular, neurological and psychiatric diseases, including stroke and dementia.

Researchers believe that high homocysteine levels contribute to cerebral vascular disease and neurotransmitter deficiency, both which can lead to depression. A study conducted in 2005 found that total homocysteine levels were higher in elderly patients with late-onset major depression (Chen CS et al 2005).

Cause of elevated homocysteine

Plasma homocysteine levels are strongly influenced by diet, genetic factors, a deficiency in folic acid, B6 and B12 vitamins, aging and smoking. Large amounts of coffee can elevate homocysteine as well as some medications.

People using the following drugs should discuss increasing their intake of folic acid, vitamin B6, and vitamin B12 with their doctor:

Sam-e and other supplements may lower homocysteine

Many nutrients and supplements influence the body’s use of the brain’s neurotransmitters. Similar to prescription drugs used to treat depression, these natural therapies increase the production of neurotransmitters or reduce their rate of breakdown. Unlike prescription drugs, however, natural therapies can also minimize the effects of oxidative stress and inflammation that contributes to depression.

According to an article by Life Extension on natural treatments for depression, the following supplements may decrease homocysteine levels and improve or eliminate depressive symptoms:

While high plasma homocysteine levels increase the risk of heart disease and stroke, it can also lead to depression, particularly in elderly patients who are often deficient in folic acid and vitamins B6 and B12. People struggling with depression that has not responded to other therapies may want to have their homocysteine levels tested and begin supplementing with B vitamins.

“Serum Folate, Vitamin B12, and homocysteine in Major Depressive Disorder, Part 2: Predictors of Relapse During the Continuation Phase of Pharmacotherapy,” Journal of Clinical Psychiatry 65, No. 8 (August 2004).