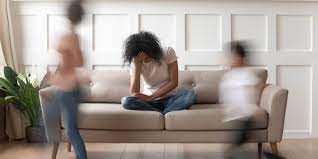 I love, I hate. Peace after accepting ambivalence.

All mothers know this.

That the love we have for our child is so intense and all-consuming that it’s spectacular and terrifying in its power.

Yet it’s rare we admit that what motherhood gives us, so too can she take away…

A few weeks after my daughter was born I was hit with severe postpartum depression.

My husband did everything he could within the confines and nerves of new fatherhood. What was he supposed to do as he watched his wife genuinely smile and coo and competently take care of our baby, then an hour later, turn around and sob and crumble into wishing “I’d just fall into a black hole of feeling nothing. Dead but not really dead.”

How do you respond to your wife’s sort of death wish?

My husband was a hands-on dad from the start. There for me in every way. But with my exhaustion and hormone-imbalanced brain, nothing helped my depression except getting back on hormone replacement therapy (I have a pituitary disorder that requires HRT), more sleep, and sheer time to get used to the demands of being a new mother.

I was a stay-at-home mother by grateful choice (and self-imposed guilt), but as the months went on sometimes I felt mind-numbingly bored. Flattened and anxious by the drudgery and repetition. Despite the numerous Mommy and Me playgroups I joined. Despite friends telling me “this too shall pass and they’re only young once.” Despite date nights with my husband and girls’ nights.

Without fail I followed the formula prescribed to make the transition to being at home easier. In fact I did more than most of my stay-at-home mom friends who weren’t yet comfortable leaving their little ones.

But it wasn’t enough.

Not until my daughter started Kindergarten and I had more time to myself and to write. First I wrote cathartic stream-of-consciousness ramblings to self-soothe, then gradually I wrote as a part-time profession.

Motherhood tore open beautiful facets of myself and my relationships. Richer in emotion, new layers of appreciation emerged as I watched my child giggle at dandelion fluff, blow a ladybug off her finger, run from the waves chasing her little ankles.

But motherhood also threw me into a full-on identity crisis.

I’d been an ambitious marketing professional for 20 years and then suddenly I wasn’t. A shift so abrupt as to almost reorganize my DNA overnight.

My daughter was of course front and center, her well-being always top of mind. But becoming a parent didn’t suddenly wipe clean my ambition or my need to spend time alone or with my husband and friends.

And yet I was told that it would, promised that “once I saw that little baby nothing else would matter in the world.” But other things did still matter, even while I fell in love with this perfect creature I wanted more than anything.

Emotions in contradiction. Or were they?

Being at home full-time is just easier for some mothers. I don’t mean the work is easier.

It’s universally hard to be chronically sleep-deprived and change 800 diapers. To be hypervigilant that your child doesn’t choke, suffocate in her sleep, stick her fingers in sockets or the dog’s mouth, run in the street, smear her poop, sling-shot off the slide or bite her toddler friend – again.

But some women adapt better to this new normal. They don’t have a full-on identity crisis as I did.

It goes without saying that watching your child grow and thrive is spectacular. What’s not spectacular is the exhaustion and the ambivalent feelings we grapple with alongside judgment from other parents.

I dropped out of the workforce when my daughter was 9 months old (I’d returned part-time after maternity leave).  Once the honeymoon of being home ended and the silence of no adult company crept in, once my daughter’s two-hour screaming fests shattered my nerves — the stress, repetition and boredom drove me mad.

So to process my feelings, when I had time I wrote.

I also read stacks of books about real motherhood. Gritty, raw stories (My favorite, Susan Maushart’s The Mask of Motherhood). These books unpacked and validated the anger, resentment and anxiety mixed with gratitude, awe and love.

To be human is to feel a spectrum of good and “bad” emotion….

The spectrum of emotions I have since become obsessed to accept rather than vilify.

From that space came a compulsion to write what I learned, loved and loathed about the experience of being human, about grappling with ambivalence.

It starts with the truth. Unpolished. Uncomfortable at first.

It starts with being radically honest with ourselves (and with people we trust).

But gradually the chokehold of trying to pretend you’re someone you’re not comes off.

Freedom comes from (trying) not to judge yourself for feeling different from your friends, mother, sister, cousin, and neighbors.

When I enrolled my daughter in two pre-schools at the same time (half days Mon-Tues for one, Wed-Thu another), you can imagine the comments.

“That’s interesting, I’d never heard of anyone doing that before,” said one friend. “Well at least you’re not doing it just to get your nails done,” said another. “You’re doing it to have time to write.”

“Actually I’m doing it to have time for errands, writing and nails.”

One of my daughter’s pre-school teachers asked me, “Doesn’t your daughter get confused?”

“Not it all. She’s doing really well. Does she seem confused to you?”

As humans we share traits born of the instinct to survive and to thrive.

But we’re also individuals, spectacular in our breadth and depth of interests, challenges and pathways to finding peace, joy, balance and God knows, less angst.

In the end, your authentic self is who should show up every day. Because the ones who love you will love you despite — or probably because of who you are. The others, well, they never mattered much anyway.

Ambivalence in motherhood Part 1: When you’re a “different” kind of mom.