In Health and Wellness, Weight Loss 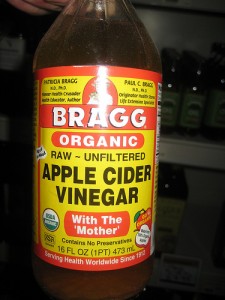 Researchers have uncovered a signaling mechanism that occurs within the excess abdominal fat of obese people and is associated with cardiovascular disease and diabetes. Fatty liver disease however, may be more likely the root cause of these metabolic disorders, an earlier study suggests.

While it may be too early to make vinegar a weight loss staple, the evidence is promising. A study published in the Journal of Agriculture and Food Chemistry(1) found that vinegar helps prevent the accumulation of body fat.

Results from a study published in the European Journal of Clinical Nutrition(2) found that vinegar lowered glucose and insulin levels in healthy subjects and increased their feeling of being full.

In a study published in Diabetes Care conducted by the Arizona State University’s Department of Nutrition(3), researchers divided 29 subjects into three groups: people diagnosed with type 2 diabetes; prediabetics; and healthy subjects. Each group consumed vinegar before eating a high carbohydrate test meal. Subjects in all three groups showed improved blood glucose levels and increased sensitivity to insulin compared to the control group who did not consume vinegar.

Researchers in the 2009 study, “Preliminary evidence that regular vinegar ingestion favorably influences hemoglobin A1c values in individuals with type 2 diabetes mellitus,(4)” compared the affect of the acetic acid found in vinegar, a dill pickle and a commercial vinegar pill on hemoglobin A1c in people with type 2 diabetes mellitus. Hemoglobin A1c is a measure of how much sugar has been around in the body for the preceding three months, a more accurate measure of sugar levels than the finger stick. Results showed Hemoglobin A1c values dropped with the vinegar but increased with the commercial vinegar pill and the dill pickle.

Gamma-aminobutryic acid (GABA), an inhibitory neurotransmitter involved in creating a state of focused calm, has been shown to also decrease blood pressure.(5,6). In a study conducted in Japan,(7) researchers measured the effect of adding GABA to vinegar on people with mild or moderate hypertension (high blood pressure).

After a pre-treatment period of two weeks, subjects with mild or moderate hypertension drank fermented drinking water with vinegar mixed with a flavoring base of fish flakes (dried bonito), with or without GABA added (in the form of sodium glutamate). Blood pressure rates dropped in both the GABA and the non-GABA groups, suggesting vinegar was the compound that lowered the subjects’ blood pressure.

Dr. Mercola, a physician, health and nutritional expert, suggests in his article, “Apple Cider Vinegar: Healing Wonder or Hype,” that people use apple cider vinegar, and in the form that is murky and brown. “Organic, unfiltered and unprocessed apple cider vinegar has a tiny, cobweb-like substance floating in it, called the “mother,” which indicates good quality,” Dr. Mercola explains. “Since the benefits of the apple cider vinegar are still being studied, there is no clear-cut guide on how to take it.” One or two tablespoons before a meal is generally the reccomended dose.

Dr. Mercola warns that because apple cider vinegar is extremely acidic to dilute it with water or juice. Straight cider ingested over time can harm tooth enamel or the tissues of the mouth and throat. An excess can also lead to low potassium levels and lower bone density.

While more research needs to be done on the health benefits, dosing and long term effects of vinegar, studies suggest the acetic acid in vinegar can lower fat accumulation, reduce blood pressure, hunger and glucose levels and increase insulin sensitivity, issues of importance to pre-diabetics and people with type 2 diabetes.