Tag: Separation of church and state

Separation of church and state, including Satan’s coloring books 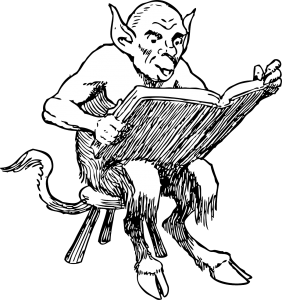 Separation of church and state, including Satan’s coloring books

Personally, I don’t care if a religious or pagan or atheist group distributes materials at public schools.  If my daughter’s old enough to decide what does or doesn’t sit well in her soul, she ‘s old enough to take it all in.

But I do care on behalf of others, in separation of church and state.

Orange School Board bans outside Bibles, Satanic materials in schools.

Ideas thrust into in the minds of thinking people doesn’t destroy beliefs, they might in fact, expand them.

But we have to protect the original intent of the First Amendment’s Establishment Clause to ward off potential abuse of religious power over non-Christians and the non-religious, so I come down on the side of separation of church and state.

As for the Church of Satan giving out coloring books in Orange County Florida schools, for obvious reasons I don’t want little kids taking their box of Crayolas and making pretty rainbows in Satan’s fiery abyss, nor do I want them reciting The Church of Satan’s 9 Satanic statements (#5 Satan represents vengeance instead of turning the other cheek! (emphasis not mine))

I happen to believe Hell isn’t a place. I believe Hell is of our own making (and that Mother Nature just does her thing rather than vengefully make our lives hell) but kids don’t deserve gruesome Satanic images pages stuffed inside their little Dora the Explorer back-packs.

The Church of Satan worships some seriously creepy stuff and if for no other reason than I can’t shake my childhood superstitions that monsters lurk under my bed (and neither can kids) I don’t want Satanic materials circulating in our schools.

I wasn’t happy when years back my then 4-year-old daughter came home from her Methodist pre-school and tucked among her jelly bellies were crucifix images (on a bookmark or daily reminder page of Scripture, I can’t quite remember) during Easter time.

Gruesome is gruesome even (or especially) because it’s in religious context.

Little kids are too impressionable to easily process the image of Jesus’s wrists and feet nailed to a cross with little drops of blood dripping down as he looks in agony towards God. We can sweet it up all we want with adult justification phrases like He died for you little one, but it’s still a half-clothed man — on a cross — nailed — with a 4-year-old who didn’t ask Jesus to die for her.

In fact, I’m pretty sure 4-year-olds don’t want anyone to die for them.

When I saw crucified Jesus in my daughter’s hands I almost forgot my usual laissez-fair attitude about not jumping down a school’s throat for doesn’t-really-matter-in-the-long-run missteps. I’m very selective with my school outrage, in fact I can’t think of one time in 15 years I went off on staff or faculty except when my 2-year-old’s teacher wouldn’t give her lunch because my daughter and her criminal 2-year-old boyfriend threw their piece of pizza on the floor just because, you know, that’s what spunky 2-year-olds do.

But here’s my issue about religious materials in schools, Christian groups don’t get to cherry pick what gets distributed in state schools — Jesus in, Satan out.

It’s all or nothing.