I wrote the following article about my friend Joy because I’m awed by her athleticism and courage, and because she wants to use her story to help raise awareness for Charcot-Marie-Tooth disease.  CMT is the most commonly inherited neuromuscular disorder in the world.

Joy is a premier athlete, a jogger-swimmer-biker who competes in the most intense triathlons (she’s also a personal fitness and tri trainer). These are the people who not only enter Ironman races but finish on two feet, without throwing up and consider doing it again. (Iron man definition: 2.4 mile swim, 112 mile bike, 26.2 mile run).

A certain measured degree of  endorsed “crazy” has to come with these choices.

Premier athletes seem to have built-in bulletproof mind-body discipline. They find others like them in neighborhoods, chat groups or gyms and form inner circle support camaraderie.  I find the dynamics fascinating. It’s a world I don’t want per se, nothing I’m pining away for, but I can’t help but admire and voyeur the intensity and accomplishment that hurts like hell before the finish line. (I work out 6 days a week but you won’t catch me running tri’s or marathons.)

Despite having to grapple with deteriorating muscle strength and changing balance from CMT, Joy finished the grueling  Aqua Bike event this past year.

The Great Floridian Triathlon (GFT) is a grueling iron-distance race − a 2.4-mile swim, 112-mile bike ride, and 26.2-mile run that has been known to bring even elite athletes to their knees.

So in 2007 when Winter Springs resident and triathlon coach Joy Von Werder challenged herself to complete the GFT, she did so with some trepidation. But with the encouragement of her family, who cheered her from the sidelines throughout the day, she not only persevered, she exceeded her expectations. The good news: The 44-year-old finished the GFT much more quickly than she had anticipated. The bad news: Not expecting Joy to complete the triathlon so expeditiously, her family was having dinner when she made her dramatic finish!

Fast-forward six years: Joy once again takes on the Great Floridian Triathlon. This time, however, she entered in a physical limitations para-triathlon category, the Aqua Bike (swim-bike).  Read more…Sorry, but I have to link to the magazine who published the piece.

Regardless of our differences, shared stories leap across our muddy rivers of misunderstanding and meet in streams of friendship ~ Laura 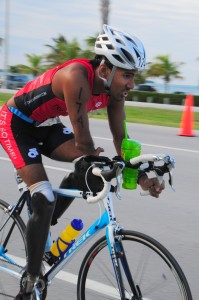 A couple years ago I heard an extraordinary young man share his message in a non-extraordinary way, that is with humble tones tucked inside a truly remarkable story.

Rajesh Durbal, the world’s first triple amputee to complete the Ironman, spoke to the Seminole County YMCA Prayer Breakfast without pomp or projecting his voice.  He wasn’t a particularly dynamic speaker except for a brilliant smile he showed easily.  But the volume of his voice didn’t matter.

Dr. Sanjay Gupta knew how extraordinary Rajesh was when he interviewed him on CNN. The city of Orlando understood when they created a “Rajesh Durbal” day in his honor. Despite the national fanfare Rajesh told our small YMCA Prayer Breakfast that morning, a room with no more than 150 people, how grateful he was to be exactly where he was.

Rajesh stammered from time to time, confessing that he was used to talking to groups about his physical hurdles, not his faith, but that he was excited to have the rare opportunity to publically share how Jesus saved his life.  He didn’t sound preachy or insistent, his words felt like an intimate testimony for how his faith carried him through seeming insurmountable challenges.

I can’t imagine bringing my faith forward without stumbling all over myself.  Because for every inch of my extroversion, spirit is unquestionably a power that mutes my vocal cords, as much because my beliefs are unconventional as for how spirit can move through even the loudest people in the most whispered, private nudges.

When Rajesh was born he had several bones missing from both legs and his right arm was partially developed.  Doctors amputated both his legs when he turned one and put him in a full body cast for 3 months.

After his cast was removed he was fitted for leg prosthetics and began the grueling process of learning how to walk.   For years he struggled with agonizing pain, feeling alienated from his peers and depression. Rajesh often thought about suicide.  Eventually he began to pray and in time he connected with Jesus.  Through his faith and hundreds of hours of training for races (Rajesh created his own prosthetics for his triathlons) he finally felt free within himself.

When he spoke to us that morning Rajesh was supremely humble about his accomplishments. After he finished the Central Florida YMCA CFO, a bold, confident New York edged guy who easily commands an audience, walked up to the podium and announced that while he wasn’t scheduled to speak, he had to say a few words about how Rajesh inspired him.

Motivated to keep going by a smile

Mark told the audience that over the years he’d competed in a number of races but that his finishes had slowed thanks to some new aches and pains. During one event he was struggling more than usual and was in so much pain he wanted to quit.  When he looked up he saw a young man with two prosthetic legs run by him, beaming.

Rajesh’s perseverance despite his challenges inspired him to keep moving.   And beyond that, Mark said, I want to share that when you move about your day realize something as small as a smile can have a profound effect on someone, something so insignificant can impact someone’s life in a positive way, and it doesn’t cost a dime.

As I listened my friend Alicia looked transfixed, her own story likely weighing on her heart.  Alicia is a personal trainer who runs a triathlon training business. Several years ago she finished her own Florida version of an Ironman, coming in so much faster than she expected that her family (who took a dinner break) missed her finish.

A few years ago Alicia was diagnosed with a degenerative disease that over time leads to muscle-wasting. She’s had to stop running because her feet go numb now and her balance is wobbly.  Alicia can’t bike her usual 80 to 100 miles and she gets more tired than she used to.  While she’s a couple paces slower; she’s not stopping.

She still looks like the poster woman for the fit, zero body fat premier athlete.  Doctors credit her extraordinary fitness level to slowing the disease’s progression.  Alicia told me she tries to strike a balance between doing too much and not enough, but that there’s no definitive way to tell when her fitness activity is helping or setting her back but by trial and error and how she feels.

After Rajesh finished speaking Alicia said she was going to her car to get one of her company training shirts for Rajesh because she hoped he would  “do her the honor” and wear it during one of his events.  A few minutes later she waved me down, a shirt bunched in her hand.  She was clearly excited and nervous.

When we walked up to Rajesh he was politely listening to a man talk about some business deal or another. Likely this was the thousandth time Rajesh had heard a pitch from someone hoping to promote a product through his story. When the man left Alicia stepped forward and introduced herself.  She told Rajesh she was a certified tri trainer and that she hoped he would do her the honor of one day wearing her company shirt during a race.

With a flat expression Rajesh said, “No sorry, I only wear extra small.”

Alicia looked startled but managed to mutter something about how it was fine, she could get him another size.  By then my exalted view of the triple amputee Ironman was gone. “Even someone in a wheelchair can be an asshole”  I once told my husband, spewing one of my home spun philosophies on human nature.

“I’m just kidding” Rajesh said and laughed, his smile spread across his face.

Alicia and I laughed. I moved forward, said hello and nervously shook his hand.  Rajesh wasn’t an ounce intimidating but for some reason the power some people have to overcome the worst and still remain soft can be so overwhelming, their exalted image swallows me.

Alicia is just as humble about her accomplishments and ability to overcome her health challenges. I needed Rajesh to know this.  After she handed Rajesh the shirt I blurted out in one breathy sentence, “Alicia finished her own Ironman in Florida she’s really amazing and inspires her clients all the time she has some health stuff going on but she still keeps going. ”

She smiled and shook her head, brushing off the attention. Behind me one of Alicia’s training clients who had been listening stepped forward.  She told Rajesh that yes it’s true, Alicia is a great trainer and motivator, that many, many people appreciate her inspiration.

Alicia usually so careful to keep her emotions tucked in started to cry. This “wasn’t about her,” she insisted repeatedly.  Rajesh smiled a little and then silently let the moment move over us.

The day before I saw Rajesh speak I told my 13 year old daughter Tara all about him. This guy is something isn’t he I said? Now that’s inspiration. Tara asked me to take his picture.  I told her I’d gauge if it was appropriate because I didn’t want to make him feel uncomfortable.  But Rajesh didn’t seem to care, he casually leaned in for pictures with the lines of people waiting for him without any impatience or awkwardness. When it was my turn for a picture I told him, “My daughter would have come but she’s a teenager so this was way too early to get up.”

Rajesh laughed and muttered that the only way to get a teenager up in the morning was to throw water on them. 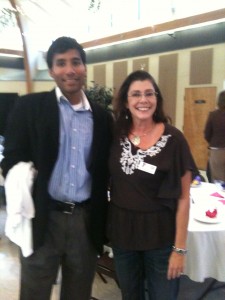 These are the people who elevate me the most in life.  Those who have earned the right to bellow their accomplishments a little and yet without false modesty,  stay grateful and humble. Men and women who overcome blows and still rise with optimism, with humility, with easy laughter and inspired tears. They cry with you and you smile with them. In these moments if we’re lucky we find the sacred, inside a silence that understands.

In 2009, Rajesh took, writes the bio on his website live-free.net, “his first leap of faith by running in the City of Orlando corporate 5k. He didn’t even come close to finishing first, but he finished.  That inspired him to challenge himself even further.  He decided to do something no one had ever attempted.  He was going to compete in the Ford 2010 World Iron Man. His peers did not believe it was safe for him to do.  But Rajesh was determined to prove that all things were possible through Christ that strengthened him. He trained day and night, hours at a time running, biking and swimming.  He spent the late nights building his running shoes from an old pair of Nike sneakers. Four versions later of the same sneaker he was able to run a Half Marathon race on his walking legs. Determined to progress, he visited Home Depot to build his own bike legs, often spending multiple hours on the floor in the aisle piecing together his creation.”