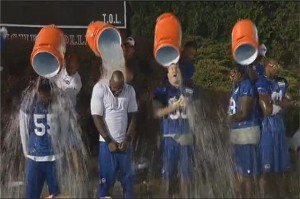 “It’s like a game of Would-You-Rather involving the entire internet where, appallingly, most Americans would rather dump ice water on their head than donate to charity,” writes Arielle Pardes at Vice. “There are a lot of things wrong with the Ice Bucket Challenge, but the most annoying is that it’s basically narcissism masked as altruism.”

I might have slung the same cynical attack until I saw the ESPN video about the man who inspired the ice bucket challenge (Pete Frates).

If Pete isn’t criticizing people for wasting water or calling the selfie videos narcissism, why should anyone else?

Even if this me-me-me video isn’t your style and the ice bucket movement makes you want to vomit because it’s showy or “slactivism” rather than hands-in-the-trenches activism, focus on this:

To date this “narcissism masked as altruism” has raised $15 million dollars.

But for a moment, let’s notice the elephant in the room.

No news here. We’re a selfie, narcissistic generation.  And for those of us raised without chronicling our everything on Facebook and Insta-me+us, many a thirty-something+ it appears, likes it (Facebook that is, not Instagram where the youth ran to hide from parents who invaded Facebook).

I admit sometimes I’m visually overexposed on Facebook but to be fair I’m usually tagged by someone else.

This clearly begs for a bullshit call-out.

“Then in the name of give-us-a-break, humility and if nothing else, self-respect untag  yourself!” If I like the picture I don’t untag myself.  I of course, am the only woman my age powered by vanity, a particularly loathsome trait among some old guard feminists who rail against today’s feminist in unapologetic stilettos.

(My brassiness is inspired by my forty-eight year old midlife confidence and (probably) because I’m reading Erica Jong’s “Fear of Fifty” and literally gasping and applauding at her balls to wall candor and dissection of double standards).

As far as “overexposing” ourselves for a cause, its working.

Social media moves mountains faster than email or the newspaper in your driveway.

If social media antics didn’t send ripples across the nation corporations and non-profits wouldn’t bother, noting it as a fad by a few (million) self-absorbed non-buying consumers.

The success of the ALS ice bucket challenge understandably upsets other charities but it wouldn’t be the first time righteous jealousy spawned new ideas and made a radical difference in fundraising. The sand in the oyster irritates itself into a glorious pearl.

Social media posts gone wild inspires and irritates people into bantering it out, the requisite cow pokes to get us off our apathy.

Say 50,000 (I’m just guessing) people did the ice bucket challenge for fun and 10,000 coughed up money, who cares?  The video loosened wallets (many of them high-profile celebrities).

Generation Next. Social media is how they hear. They listen. They watch. They feel. They share.  And some of them, do.

P.s. After my daughter did the ice bucket challenge I asked her if she was willing to donate some of her own money to ALS because that was the bigger point. She said yes. Days later when I asked her for the money she reminded me I still owe her money from last week when she wen to the mall but she would donate anyway. I told her I got her covered. 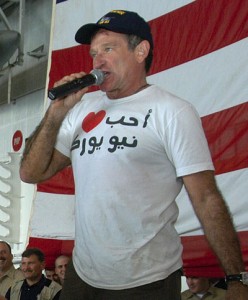 I couldn’t figure out why I woke up this morning still thinking about Robin Williams. My husband offhandedly asked me yesterday why he thinks he did it, and maybe he asked me because no one can grasp why this beautiful brilliant man who made us snort laugh took himself from his family and fans.

Or maybe he asked me because he knows when I battled post-partum depression 16 years ago that to explain the abyss as Anne Lamott calls it, is nothing short of impossible.

Your brain is hijacked by forces outside your highest self, that one thing bound to rescue you when you’re alone and yet surrounded by everyone. Your rational thoughts are cruelly re-arranged by random neurochemical screw-ups until what you know  to be true becomes a big confusing lie.

Worse, part of you still senses that good stuff exists, hope, family, laughing, all those energizing, life and hope sustaining feelings get buried under numbness and sludge until the you that is you suffocates.

So while everyone and every beautiful mundane moment tells you “Hello Sunshine, it’s all good,” you don’t believe it because you don’t have the operating instructions to believe it. It’s like describing the feel of bright yellow to someone who only feels in black.

By the outstretched arms of my needing child and desperate trying of my husband, by the angels and God forces and my own stubborn belief that I better claw back up for them AND for my own inherited joy, I climbed out of that hellish abyss and I now encourage women (and men) to do the same.

Strength comes when we manage to poke a pinhole through our impenetrable fear until the light inches in, and by our bravery to ask for help.

They’re not that different from you, are they? Same haircuts. Full of hormones, just like you. Invincible, just like you feel. The world is their oyster. They believe they’re destined for great things, just like many of you, their eyes are full of hope, just like you. Did they wait until it was too late to make from their lives even one iota of what they were capable? Because, you see gentlemen, these boys are now fertilizing daffodils. But if you listen real close, you can hear them whisper their legacy to you. Go on, lean in. Listen, you hear it? – – Carpe – – hear it? – – Carpe, carpe diem, seize the day boys, make your lives extraordinary ~ John Keating played by Robin Williams in Dead Poet’s Society.

Entitled? Of course veterans, and our hard-working willing.

Few issues on the American landscape are more sacred, more immune to partisan feuding than supporting our returning soldiers.

Most people, pro-war or against,  wouldn’t dare deny soldiers accessible, affordable quality healthcare, nor should we willing to let even one soldier suffer or die waiting months to see a doctor.

And so we thank our soldiers for their service, a quick respectful acknowledgement for work too profound and unfamiliar, yet directly responsible for our freedoms.

Yesterday our nation actualized gratitude to our soldiers when the President signed a $16.3 billion plan to help ease health care delays at Veterans Affairs facilities.

Soldiers we can all agree, are entitled.

And yet when we think of non-military citizens and entitlements, they are The Lazy, The System Parasites. And indeed, parasitic people exist.  Families who grow up in a cycle of poverty and payout or for the first time get a taste of free money and despite small avenues and alternatives that (might) peek through the cracks, they forever remain on the dole.

Or, perhaps someone is the first in his/her family to get food stamps, disability, Medicaid or WICA due to a series of events that unraveled their once economic stability. Suddenly the taste of something for nothing addicts them to the payer system like Pavlov’s dog, forever enjoying jobless checks and alas, the disincentive to self-motivate and break free perpetuates.

Be poor, get more.

But the facts are, the number of working poor, working homeless, of homeless who want to work and get off the dole, staggers the number of people who can, but won’t.

While veteran entitlements are earned sacred cows, yet we also have men and women who while they don’t fight to protect our nation, they fight to protect their families. Touched by catastrophic illness, job loss, mental health issues, children with special needs, a series of unforeseen unfortunate events leaves thousands of our hardworking willing at the mercy of a hand up.

And so I I argue that if our hard-working and willing veterans deserve a hand up so do our hard-working willing non-veterans who want nothing more than to cut ties to government support and feed back into the payer system that helped them recover and stand proud.