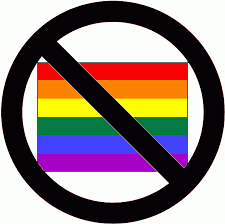 I just sent the following email to this Kentucky business owner. I’m HORRIFIED his family received death and rape threats for his store policy, but I’m also horrified at his policy.

I am terribly sorry your wife and children received death and rape threats in response to your policy to “refuse to produce promotional products that promote homosexuality.” I’m glad the two men were charged with Terrorist Threats in the Third Degree. What your family went through was horrific, inexcusable and undoubtedly terrifying.

I am however, deeply saddened that in this day and age a company would deny service to a citizen based on sexual orientation under the protection of “religious beliefs.” What if my religious beliefs didn’t for example, support “promoting” people of color or bi-racial children or, or, or….

I understand you allow the LGBT community in your store, but by refusing to embroider anything that reflects sexual orientation, you are indeed, blatantly discriminating.

Please don’t invoke Scripture to validate your discriminatory stance. Instead, please pause and think for yourself. Does your policy even FEEL remotely God-like?

Your policy is anything BUT in line with the Jesus and God that I know. You mention that you “have been the victim of racism” and I’m terribly sorry. I hope your children will never feel the sting of racism, or any other “ism” in their lives. Yet somehow the pain you felt doesn’t resonate with the pain you cause someone under the protection of “religious beliefs?”

You must understand it’s simply impossible to “promote” one’s born sexual orientation any more than one can “promote” being white, black, female etc. I don’t promote my “female lifestyle” I am female. I didn’t decide to be Caucasian. I am Caucasian.

How old were you exactly, may I ask, when you decided to be heterosexual?

Your refusal to create products that “promote homosexuality” is no different than if a business owner refused service that “promoted the interracial lifestyle.”

If God was against our gay citizens God would not have created people attracted to the same-sex. If you can’t use compassion to grasp these concepts, please use good old-fashioned common sense.

The God I know is shaking His or Her head and frowning. I truly hope one day you’ll sit down with yourself and realize that refusing service based on one’s sexual orientation is the same as refusing service based on race, ethnicity, gender etc. The Bible isn’t a book of conveniently held beliefs or a book to uphold discriminatory practices, the Bible is an interpretation through the prism of Man and I’d suggest, a reflection of what sits in one’s heart.

I hope your children will know true grace as they grow; I hope they will know, despite their parent’s views, that all God’s children, born who they are, deserve respect and equal service.

God, guns but no gays? Shame on your Kentucky lawmakers.